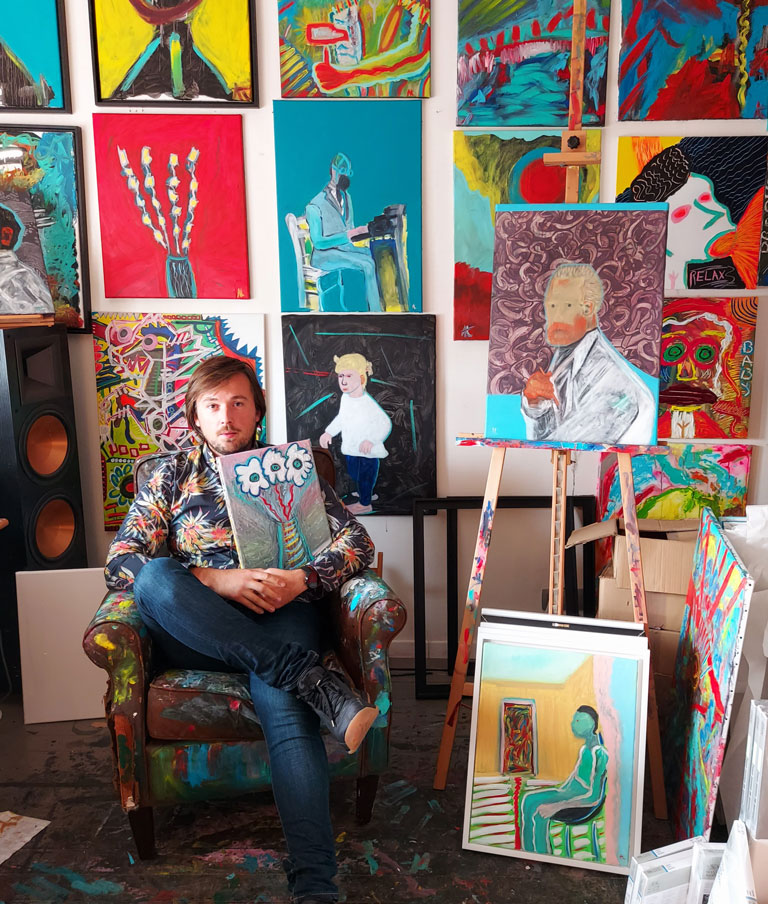 It all started in January 2019. Jules Atarax began painting in a very raw and colorful field. Since then, he has been experimenting and placing new aesthetic discoveries on each canvas. His creations sold all over the world have earned him international recognition. Today, he works mainly on free figuration and abstraction. This official page aims to show his work and to offer some of his works for sale, both literary and pictorial.

Jules Atarax is a Belgian painter born in 1985. Everything and Nothing predestined the artist to painting. Coming from the depths of Wallonia, he received an education unlike what he was intimately made of: creation and thought. We could see in him a modern Dante catapulted into the second millennium. After years of writing practice, he decided in 2019 to take up painting. This idea came to him after being confronted with an abstract painting by William Turner “Landscape with a River and a Bay in the Background” at the Louvre. Extremely touched by the force of this abstraction, his choice was made, it is to painting that he will dedicate the rest of his life. So he decides to work a lot on it. His practice of painting is powerful, it is situated between brut art, expressionism and naive art but it also goes towards abstraction because despite his advanced age, the artist is still at the beginning of his practice and experiment a lot.

Van Gogh said that it takes a thousand canvases and ten years to become a good painter, Jules Atarax is well aware that he has to work even more. But his leg is already well established and we can recognize his style quite easily. This earned him some recognition and allowed him to sell some paintings around the world. His approach and technique places him in the middle of the Soutine-Basquiat-Condo triangle, right in the middle of neo-expressionism. His painting gives off a lot of force by the colors used but also by the angry gesture and the few words used here and there. He has especially devoted himself to the composition of so-called “hallucinated” portraits which reveal what is hidden behind the human mask.

He claims to be numerous currents and painters. Like Modigliani, he has a benevolent and very interested eye on various artistic practices. What matters most to him is the honesty of the approach, which drives him, if the work manages to release the extra soul of the artist. It goes far beyond pure technique. Rather, he talks about vision, which he tries to conceptualize through his own observations and writing while working on what he calls Vitalism. His back and forth between writing and painting allow him to keep a critical eye on his practice.

He has painted over a hundred canvases, mostly hallucinatory portraits as well as an abstract series which he called “Overcoming Darkness” and which is still in progress. His first solo show “All Crazy” was very successful, which called on him to progress in his approach and to make others.

Check Jules Atarax out on social networks so you don't miss a thing!

Hello All, I have decided put my last works on the NFT market. And the deal is totally great. You buy a NFT and you have the original and physical version of it. Oil canvas !!! Have a good bid !!! J.
Read More